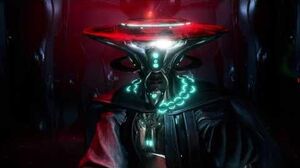 
Mark Lawrence. Middle-Earth: Journeys in Myth and Legend. Donato Giancola. From Unseen Fire. Cass Morris. The Grey Bastards. Once the Operator calms the Cephalon down, they ask Ordis to reestablish Transference with their Warframe. To this Ordis replies that he is unable to do so, asking the Operator to reestablish the Somatic Link with their Void energies. At this point, players must use their Void powers on the Somatic Link receptacle on top of the Transference chamber by firing a Void Beam at it, activated via the fire key. However, the Operator experiences a backlash that prevents prolonged periods of firing.

Believing that the Operator can no longer control Warframes, Ordis suddenly initiates his Purge Precept, decompressing the ship while turning the Sentinel's default guns even if it is not equipped with one against the Operator. Barely containing his care for the Operator, Ordis urges them to head to the navigation console so that he may detach the landing craft. The player must now escape to the front of the Orbiter, avoiding both the Sentinel's attacks and steam vents that periodically stagger and block the player from progressing.

Managing to escape to the front of their landing craft, the Operator now find themselves stranded on top of a snowy mountain on Earth.


Players must navigate the snow-covered path and avoid getting blown off by the wind as they make their way to a cave at the end of the path. Within the cave, the Operator finds a corpse by a fireplace, where they are then confronted by Teshin once more. After a brief altercation where the Operator fails to land a punch on Teshin, the latter locks the Operator inside the cave by closing an old automated door. As Teshin's voice explains the nature of Margulis ' "lie" as to what she did to the Tenno, the Operator comes across a massive Ayatan Sculpture encased in icy stalactites.

Players must use their Void Beam to destroy the ice, before shooting the front of the Sculpture with the beam, setting off a reaction that sees the Operator fall to the abyss below. After waking up from their fall, the Operator remembers bits of their past on the Zariman when an accident first broke out on the ship and were lied to by their original mother about being safe with her, as narrated by the Queens. The Operator comes across a chamber with the floor covered in bones and skeletons, with a creature - a Golden Maw - visibly moving underground that Teshin warns the Operator of.

The objective of this particular section is to cross the chamber safely to the other side without being devoured by the Golden Maw, who will erupt from the ground and consume the Operator if the player stays too long within the floor of bones. In order to cross the chamber, players must sprint and jump to safe areas, visible as large, solid rocks, before the creature can reach them. The Golden Maw itself will move around the bone floor in particular patterns, and thus players must time their runs to when the creature is furthest from their position. Alternatively, there are side paths in the chamber that allow for safe passage to the rocks.

After crossing the chamber, the Operator gains the ability to perform Void Blast , a powerful conic blast that can be fired by the Operator to the front, and which they can use to destroy the barrier blocking their way further down the cave. After another memory narrated by the Queens regarding the Operator's original father informing them that something out in space is watching the crew, the Operator will unlock another ability called Void Dash , a short-range teleport allowing them to cross large distances quickly, and which the player can use to cross the gap by that part of the corridor going forward.

Both abilities use up energy, visible as a symbol on the player's crosshair; the brightness of the symbol determines the energy level, with the crosshair become dimmer the more energy is used until it is depleted, and brightening as the energy recharges. Players will come across yet another bone chamber, this time with two Golden Maws, thus necessitating the use of their newly acquired powers to cross the chamber.

As with the other Void powers, Void Mode consumes energy while active. Another bone chamber will present itself to the player soon after, which will require players to use Void Mode in conjunction with their other powers to cross. At the end of the path another memory is narrated by the Queens, explaining the adults on the Zariman have gone mad by the Void's influence.

Players are now given a choice between three replies in how to respond:. The Operator will then unlock the ability to perform Transference , allowing them to physically possess and take control of an eligible target, as Teshin explains that they have now unlocked their full power. In the next and final bone chamber, players are tasked with using Transference against a Golden Maw, which can be done by stunning the Maw with Void Blast, and then using Transference while targeted.

Once players have control of the Maw, they can use the Maw's ability to burrow and attack to cross the chamber to the mountain exit. Outside, Teshin reveals that he is a Dax, a soldier who fights for the Orokin, but can never defy his masters and the Kuva Scepter, forcing him to obey the Queens. Players must navigate their way through the mountain side before coming across a Yuvan Theater, a place where Orokin used to gather to barter over the "young and exotic", to be used in the process of Continuity.

Teshin then reveals that Continuity is what the Queen intends to perform on the Operator, as well as the nature of the process: to take over the Operator's mind and body, claiming it as her own. The Queens narrate the final memory of how the Void coiled itself around children of the Zariman, prompting another dialogue choice:. The entire sequence in the mountain pass is revealed to be a mental scenario taking place in the seconds before the Queen's Transference Surge completes, but this time the Operator breaks free from control.

Waking up in the Orbiter once more, the Operator finds that they have retained the new powers they have unlocked, and are able to use their Void Beam once again. Intending to reclaim their Warframe and save Teshin from the Queens, and with Ordis telling them that the Fortress has moved once again, the Operator performs a Transference with player input to teleport themselves to their Warframe. The Kuva Guardians are immune to Warframe attacks, and Warframe powers are nullified inside the chamber, along with the player being unable to use their Primary and Secondary weapons, or any Gear.

In order to fight the Guardians, the Tenno must utilize their Operator's void powers to destroy them by stepping out of their Warframe using their Transference ability. Each Kuva Guardian can be killed via the following steps:. The Operator can take damage, but cannot be killed; if the Operator's health is depleted, they are immediately returned to the Warframe, and can be re-summoned afterwards. Each Operator's death depletes Warframe's total health though, so it's still possible to fail this way.

On killing the first Kuva Guardian, Teshin will point out the weakness to the Queen's systems: the nine large, red braids hanging around their throne. Killing each set of Kuva Guardians will make the braids vulnerable to attack, indicated by their glyphs glowing red, and thus allowing them to be destroyed with the Operator's Void Beam. Three braids can be destroyed before another pair of Kuva Guardians jump into the fray, repeating the process until all braids are destroyed.

After destroying all the braids, the Elder Queen will order Teshin to attack the Tenno. Unlike the Kuva Guardians, Teshin is capable of restraining the Operator via his Orvius glaive weapon, rendering the Operator helpless.

However, Teshin is vulnerable to the Warframe's melee attacks. Once the player has defeated Teshin, the Queen will try to attack the Tenno with a beam from her Scepter. For this part, players only have to wait for the Queen to drop her shield to fire the beam, and then use Void Dash against the Queen. With the Queen's Kuva Scepter in hand, Teshin is freed from the Queen's influence and requests that he kill her, prompting another dialogue choice to the player, which will affect the cutscene that follows:.

Regardless of which choice the player makes, Teshin leaves and the Operator regains contact with the Lotus, and are then ordered to extraction. Upon their return to the ship, Ordis asks the player if they can still use Transference, prompting the player to perform Transference to switch to their Operator. A short argument erupts between the Lotus and the Operator over Margulis' actions with the Tenno, before Ordis interrupts with reports of an active Old War beacon. The Operator once again returns to the same mountain pass they visited during the dream sequence.

While the route is identical to the previous Mountain Pass mission, this time there are obstacles to the player's path that has to be removed using the player's powers - Void Blast for destroying ice walls, and Void Beam for opening Orokin doors by shooting a barrel with glowing lines beside the doors. On reaching the large Ayatan Sculpture seen previously, players can activate it once again by shooting it with a Void Beam. Once activated, a series of platforms will float and be lit up as the player traverses them via Void Dash, until they reach a door at the top of the chamber.

Beyond it, at the summit of the mountain, the Operator meets with Teshin again, who expresses the Kuva on the Scepter that was taken from the Queen is believed to be the blood of the Orokin ancestors, either an elixir of immortality or a maddening oil. Teshin tells the Operator that the Kuva may just be a symbol to the Operator, that what they do with it will define them more than anything. The final dialogue choice for players will appear:.

Teshin shakes the Operator out of their trance, and asks them to be careful, as the world "weighs more heavily" on them now. After completing the quest, Teshin will send an inbox message, asking for forgiveness for his actions.

The message also comes with five rewards for completing the quest:. Ordis will also send an inbox message containing a Personal Quarters Segment Blueprint , granting the player access to their Personal Quarters on their Orbiter. If the player has also completed Saya's Vigil , they can gain access to The Quills ' wares, which is done by heading to the top-right side of Cetus while as the Operator. Doing so will provide a Mote Amp , and unlock all of the Focus trees.